From the playground to the boardroom, 3 ways labels RUIN EVERYTHING {sort of}

When I first started to get really interested in mindfulness, I’d hear a lot about how important it is to observe, describe, and participate in what you are doing. But don’t label the experience. Never label. This always seemed like splitting hairs to me. I could barely see the difference between describing and labeling; it all seemed like a matter of semantics. Describing, labeling. TomAyto, tomAHto. Amiright?

The deal is, labels often carry judgement. And sometimes (most of the time?) the source of our stress isn’t necessarily from the actual situation, but from our reactions to, and judgements of, the situation.

First with kids. In a few books I’ve read (Siblings without Rivalry, How to Talk, and If I Have to Tell You One More Time, to name a few) it has mentioned how it isn’t a good idea to label your kids. Even if it is a positive label (she’s the athletic one), it’s not a great idea. It can set up sibling rivalries, uncomfortable expectations, limitations, and it can make your kids feel like they are some sort of two-dimensional caricature of themselves to you. And that is just the positive labels! That doesn’t even address the impacts of negative labels (sloppy, lazy, the-not-athletic one).

Making Feedback Work, by Elaine Holland is written for managers in the workplace, but it has little gems that are applicable for both parents and CEOs. Anybody who has read Gottman’s marriage work knows that feedback should be given in a ratio of five positive statements for every one negative statements. This is actually true in the workplace as well. GO FIGURE.

Effective feedback is given in the form of observable statements. I.e., NOT descriptive labels. Therefore, statements like, “be more professional/less emotional/more of a team player” are crap. And of course they are! Those statements could mean one thing to the person giving the feedback and another thing entirely to the person receiving it. So you could think you have made HUGE strides in your “emotional” problems (read: you’re a woman, right? How’d I guess. #sexism), meanwhile your supervisor still thinks it is a massive issue and that’s why you’re going nowhere fast in the organization.

Instead feedback should be given using these three steps:

This might sound familiar because it is a lot like some of the advice in the How to Praise a Child Round Up. Once again, if you know how to raise and/or teach a child, you should know how to get a corner office. Not that that’s how our society works. But you know. Just sayin’.

And the amazing thing is, you can tell people almost anything when you state it in the form of a fact rather than a judgement. People can argue with your opinion or judgement. Nobody (reasonable) can argue with facts. You have a sleazy boss? It is hard to say, I’ve been meaning to tell you, you’re kind of sleazy. Because that is a label, and it is a kind of harsh one. And maybe his behavior is too subtle to really go to HR and say, "he’s gross, do something, maybe?" But you can say, “I’ve noticed you look me up and down a lot and touch me more than any other of my other coworkers. (Describe the behavior) It makes me uncomfortable. (Describe the impact) I’d appreciate it if you could just look me in the eyes and give me some more personal space. That’d be great.”

FYI: If by chance, you are on the receiving end of some useless, label-filled feedback {because your boss was never an awesome parent or teacher like you, natch. or like many bosses, your’s wasn’t hired for his people/management skills.} here are three questions you should ask:
Overreacting and Labels 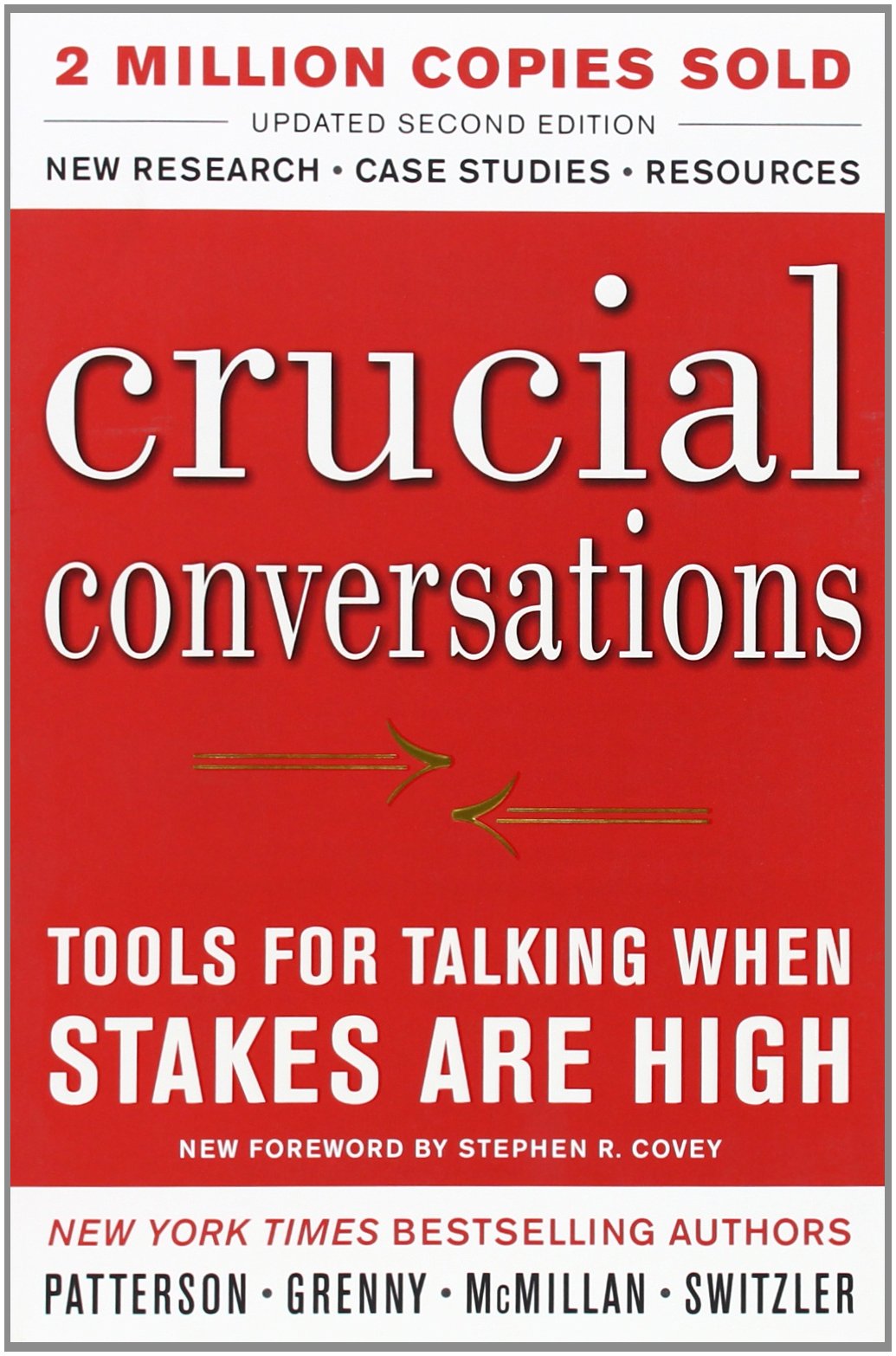 The authors of Crucial Conversations make an important point. When you say, “That made me so angry!” what you really mean is, “That thing happened, and I immediately, without even realizing it, created a story to explain why it happened (what everyone’s role and motives were, etc.) and that story made me so angry!”

For example, your boss was late to a meeting you organized (that was the thing that happened). Your story was, your boss doesn’t respect you or think what you have to say is important. He blew off you and your meeting and walked in late to show everyone how unimportant he thinks you are, and how useless what you have to say is. And that story, not so much the event, is what made you angry.

Your story is really like a complicated label. At the very least, you are labeling the other characters in your story. Often times these stories are what the authors’ consider “clever” because they essentially let us off the hook. There is a victim (you), a villain (the other guy), and/or a helpless character (you also). These labels often allow us to underplay our own role in the problem or mistakes we might have made, and exaggerate the role or cruel motives of others.

If we step back and look simply at the facts of the case and remove these labels, we are sometimes able to consider other possibilities. It leaves us some room for a little more empathy, or at least a little more room to consider other perspectives. For example, maybe your boss was one his way to your meeting and got sick. He would have gone home, but he didn’t wan to miss your presentation. He got there as soon as he could, and sat through the whole thing feeling unwell, because he knew it was important to you and he wanted to support you. If you stopped to consider other reasons your boss could have been late, you could have labeled him as something other than the villain and then you wouldn’t have been angry.

It is the same with our kids. A lot of times when kids misbehave or do something bad, we sometimes think they are doing it just to disrespect us. We forget they are just kids and they actually are really motivated to please us. But they are kids! They are exploring their world, testing their boundaries, learning new things. They have short attention spans, a limited understanding of the world and sometimes we haven’t clearly explained how things work or what we expect in some circumstances. And a lot of times we’ve done a really crummy job considering things from their perspective.

That’s why it is really important to step back, take a deep breath, and carefully observe before we jump in and label and flip out. That space we create gives a little more room for empathy, clarity, and perspective. All good things.

Email ThisBlogThis!Share to TwitterShare to FacebookShare to Pinterest
Labels: crucial conversations, How to Talk so Kids Will Listen, If I Have to Tell You One More Time, Making Feedback Work, Mommy CEO