So Christianity Today ran this article I've Grown Cynical of Cynicism. And all these people on social media are all, oh, what do you think of that new CT piece on cynicism?! and I'm all:

Yeah. That is my secret for avoiding cynicism! Except wait. Hold the phone. Cynicism? Are you sure about that? Because... 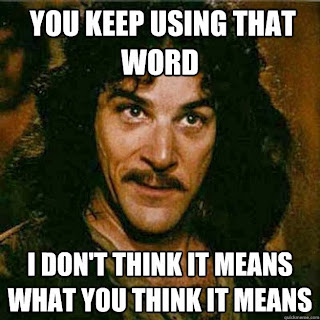 So against my better judgment, I finally read it.

Our cynicism meter soars when, say, Jimmy Kimmel poses fake questions, like "Did you watch the presidential debate last night?" and gets people on the street to go on and on about a fictional debate that never even happened. People are so full of it. These jokers can't be trusted, we cynics say with a wry smile that suggests we have a special insight about how the world works.

That's not an example of people being motivated by self-interest. That is people being dumb, but trying unsuccessfully to hide it. Self interest is like, screwing over your congregation by stealing money from the church offering. So being cynical is thinking that when a pastor buys a mega mansion, he did it by taking liberally from the church offering. See the difference here? Laughing at people being dumb? That is like, dramatic irony or something. It's definitely NOT cynicism.

Maybe she means "critical?" People are too analytical? Too snarky? Too mean? 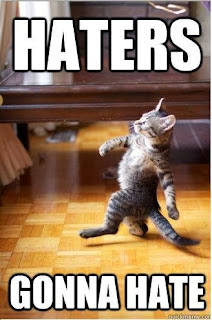 And that is true. Haters are gonna hate. But here's where I've gotta stop ya, guest writer Sarah Cunningham:


But cynicism in the end may not be funny. It may impact our physical health, with the most extreme cases being diagnosed as "dysthymia"—"a little known yet common condition characterized by chronically low mood and energy, sleep, and appetite problems as well as an aversion to social contact." Or in more moderate cases, it may at least lead to emotional imbalance as we allow our minds to be fixated and consumed by negativity.

Focusing on the negative, hating, if you will, does not cause dysthymia. There is nothing, NADA, in medical or psychological literature to support this absurd claim. Dysthymia is not an excess of negative mood. It is actually an absence of any feeling, positive or negative. The positive/negative dichotomous thinking is generally oversimplified and an entirely wrong way to go about solving mental illness. I think this article (How to Built a Happier Brain) does a great job of breaking it down:


First, positive thinking by definition is conceptual and generally verbal. And most conceptual or verbal material doesn't have a lot of impact on how we actually feel or function over the course of the day. I know a lot of people who have this kind of positive, look on the bright side yappity yap, but deep down they’re very frightened, angry, sad, disappointed, hurt, or lonely. It hasn't sunk in. Think of all the people who tell you why the world is a good place, but they’re still jerks.

Next, the cynicism article goes on to discuss venting.


One recent study on teenage girls found those who vented to each other about their problems were more likely to develop anxiety and depression. And according to Amanda Rose, the author of the study, the same is probably true for adult women as well.


I've actually blogged a bit about this topic here and here. It's true, venting doesn't actually help. It is a form of catharsis that makes you feel better short term (or think you feel better), but actually makes you worse (in measure of stress) and prolongs your negative emotion that you are experiencing. But. Here is the problem. And it is a significant one. Ms. Cunningham never really established that what any of these people, from Jon Stewart to SCCL, are doing is actually venting about their problems. Venting is basically the verbal equivalent of hitting your pillow when you are upset. Which has two key components: one, it is unproductive; and two, it is done when you are in a negative emotional state. What if it is productive? What if your discussion helps you facilitate action? healing? and fellowship? and promotes knowledge and facilitates understanding? And two, what if you have processed your emotion? Then you are not prolonging a negative emotional state. Instead, you have let it pass, you have taken the information that the emotion provides (which, heck, that is sort of the point of emotions. the point isn't to stuff them down because, bad emotion! bad! wrong! go away, emotion!) and you are now using that emotion to inform your decisions and choices. Then, yes! that is exactly what you are SUPPOSED to do. So yay for you!

Email ThisBlogThis!Share to TwitterShare to FacebookShare to Pinterest
Labels: religion