Dave Ramsey and Jenny McCarthy sitting in a tree, V-O-M-I-T-I-N-G

Pretty much anybody who has taken any introduction to ANYTHING class ever in the history of classes has learned that correlation does not equal causation. I mean, I'm pretty sure it was covered in my first statistics class, economics class, research methods and design class, psychology class, biology class, you know just about any class.

So either Dave Ramsey never went to school (or he went to school with Jenny McCarthy #theUniversityofGoogle), or he's being obtuse for the sake of being a jerk to poor people. Because he posted this 20 Things the Rich Do Every Day that I found from cool Twitter friends. 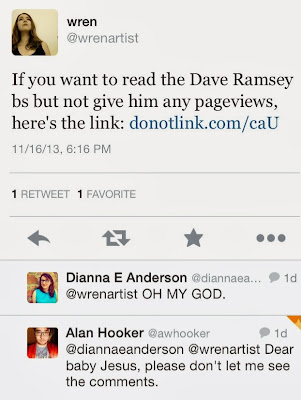 So I thought I'd add a few to the list of (completely suspect, self-report, likely-biased, ill-defined, totally-WTF) habits (I mean only six percent of the wealthy say what is on their mind? Then what in God's name are they saying all day long? lies? or just a bunch of meaningless fluff statements? What kind of inauthentic relationships do you build on your six percent of what-is-on-your-mind statements a day?! Lord have mercy.)

21. 100% of millionaires ensure that they have over a million dollars in assets every day. 0% of the poor do this.

22. 92% of the wealthy write thank you notes for their trust fund or inheritances. 0% of the poor do this.

I mean, seriously? Do you really not see why this list is completely dumb?

And let's talk about a few of these shall we?

Do you mean good habits like not breaking for pedestrians in your fancy schmancy rich person car? Or "opportunity luck" like playing in a game you know is rigged but still thinking you are winning because you are at great playing? Go ahead and watch this and just see how being rich changes how you act and think.

And speaking about changing how you act and think, here's some interesting articles about the serious impact of poverty on people's lives. So your "take ownership of your life by making a stupid to do list" is beyond patronizing. It is ignorant and insulting, Mr. Ramsey. So kindly, spare me.

We hypothesize that poverty directly impedes cognitive function and present two studies that test this hypothesis. First, we experimentally induced thoughts about finances and found that this reduces cognitive performance among poor but not in well-off participants. Second, we examined the cognitive function of farmers over the planting cycle. We found that the same farmer shows diminished cognitive performance before harvest, when poor, as compared with after harvest, when rich. This cannot be explained by differences in time available, nutrition, or work effort. Nor can it be explained with stress: Although farmers do show more stress before harvest, that does not account for diminished cognitive performance. Instead, it appears that poverty itself reduces cognitive capacity. We suggest that this is because poverty-related concerns consume mental resources, leaving less for other tasks.