Parents, don't let your babies grow up to be racist 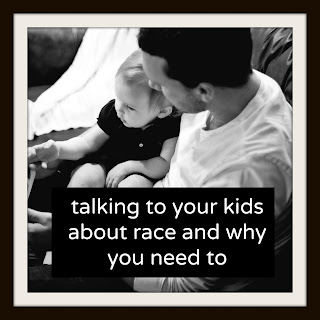 I read Nurture Shock when I was still pregnant. And in my pre-motherhood state, the chapter on racism was quite jarring. I was like, holy crap! Toddlers can be racist?! (See Baby Discriminate) So what do I do? I was hoping it would end with some straight-forward advice on obviating this toddler tendency. And instead it ended with a story about a classroom with a brown Santa Claus and I felt sorta like, um? I mean, that is cool, and not to make everything about me but what am I supposed to do with my kids? I mean, what the heck.

Thanks for nothing Po and Ashley. Sheesh.

Not really, not at all. There were some important take away messages (go ahead and read it). For starters...

The weird thing is, while white parents aren't talking to their kids about race, they are talking to them about gender issue, religion, etc. Weird, huh? And for some parents, it isn't just that they aren't doing it, like whoops? it hadn't come up? {although, it has at our house, just sayin'.} It is that some of them are actively avoiding it. Like it makes them all uncomfortable. {but I also get nervous when race is broken into a white/black binary, which this chapter seemed to do; like it erases the spectrum in between.}

First, there is this intuitive, but false, idea that: well, I'm not racist, so my kids won't be racist {because everyone likes to fancy him/herself captain equality; nonetheless, it is a good idea to to consider one's privilege and let go of any poorly thought out racial baggage}. But "numerous studies have shown that children’s racial beliefs are not significantly or reliably related to those of their parents."(source) Second, there is this crazy notion that we should be colorblind. Pretend that race isn't "a thing." Like if we pretend like there is no such thing as race, that will magically solve racism, right? Wrong. So wrong.

Here is why "colorbindness" is messed up.
Now let's get back to how little kids discriminate.

Anderson Cooper 360 did a study using ambiguous pictures (like the one above) and asked six year old kids to interpret them. Ask them if their parents would be friends. Stuff like that. The results were eye opening.

Overall, black first-graders had far more positive interpretations of the images than white first-graders. The majority of black 6-year-olds were much more likely to say things like, "Chris is helping Alex up off the ground" versus "Chris pushed Alex off the swing."

They were also far more likely to think the children pictured are friends and to believe their parents would like them to be friends. In fact, only 38% of black children had a negative interpretation of the pictures, whereas almost double -- a full 70% of white kids -- felt something negative was happening.

University of Maryland Psychologist Dr. Melanie Killen said it has a lot to do with the fact that black parents talk to their kids about race and white parents don't. And when they don't? "That racial void left by parents is filled with all of the overt and subtle messages on race from the rest of society." And the extra depressing part? That optimism that black children have at age six? It fades by middle school. {maybe because they've started to realize their white friends think they are mean swing-pusher-offers?} So we need to have these conversations when our kids are little. But we need to KEEP having these conversations.

So Why Do Kids Discriminate?

There are a few main reasons I'll get into here.


...the immature cognitive structures of preschoolers make them rife for stereotyping (Aboud, 2008; Hirschfeld, 2008; Katz & Kofkin, 1997). While young children are able to categorize people by race, they are often not able to categorize a person according to multiple dimensions at once (Aboud, 2008) (source)

2) Second, kids are quick studies. They learn which categories seem to be associated with different things. They notice stuff like height or hair color aren't predictive of stuff in society, but race is. "In other words, children pick up on the ways in which whiteness is normalized and privileged in U.S. society." (source) This reminds me of those super depressing black and white baby doll studies. If you haven't seen or heard about those studies, you have to watch here.

3) Finally, there is something called "ingroup bias" where people tend to show favoritism towards people who are in the same group as them. Put groups of kids at a summer camp in certain color shirts and they will start to like kids in the same color shirt and dislike kids in other color shirts for NO OTHER REASON than shirt color. It happens regardless of what society (or the summer camp) privileges, it is just a weird thing people do. {dude. summer camp. breeding random dislike for no good reason since forever, amiright?}

These three issues combined are why it is so important we talk to kids about race. Like yesterday. I'm looking at you pregnant lady. Just kidding, you get a break. But all the rest of you, {ahem, white parents} get talking. And stay talking about race.

So What Should Parents Do!?

The short answer is, TALK TO THEM ABOUT RACE!

The medium answer is, talk to kids (in simple, explicit, age-appropriate language) about issues related to each of the above reasons why kids discriminate.

The long answer is bulleted below.

how do you (or will you) talk to your kids about race? what are some good books, shows, resources, etc? Funny stories? awkward things they said at the grocery store? DO SHARE! (even if they aren't related to race, I love awkward kid in public stories, just you know. if nobody else is commenting and you feel sorry for me).

Email ThisBlogThis!Share to TwitterShare to FacebookShare to Pinterest
Labels: race