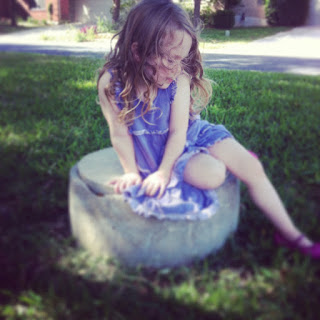 I've talked before about mindfulness and how important it is. I read an article recently that explains it really well: What being mindful will reveal to us.

Commonly, meditation involves focusing on one’s breathing as a way to anchor one’s attention in the present moment. Practitioners are also frequently taught to separate their experiences (breathing, pain, thoughts) from their judgments about them. Thus, with respect, for example, to anxiety, one learns to move from the judgment that “anxiety is bad” to the observation that “I’m feeling anxiety.” In this way, the unpleasantness of experience often reduces.

I realized the other day though, that I don't just need to move from the judgment that "anxiety is bad" to the observation that "I'm feeling anxiety." I also need to do that in situations where people around me are feeling anxiety. The other night I heard Hannah melting down while I was putting Maggie to sleep and it was like every fiber of my body was reacting to Hannah's stress, and the stress it was likely provoking in her dad. And it just felt like this positive feed back loop spiraling out of control: they are feeling anxiety, anxiety is bad, I'm feeling anxiety, anxiety is bad. And I was like, dude. enough. I can be empathetic without actually vicariously experiencing everyone else's negative emotions. Right? No seriously, I'm not be rhetorical, it is possible right? (just kidding, I'll be fine. but a toddler tantrum is still a crazy powerful thing sometimes (well, for women anyway, see below) sheesh.)


In an experiment, 18 men and women were encouraged to let their minds wander while researchers played recordings of white noise mixed with an infant’s cries. Those cries abruptly raised attention levels for women, brain scans showed. But men’s brains remained in a resting state, according to study results published in the journal Neuroreport.

Email ThisBlogThis!Share to TwitterShare to FacebookShare to Pinterest
Labels: mindfulness