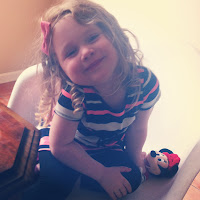 If I had to identify a parenting style, I'd consider mine "positive parenting." Meaning, researched-based, teaching-focused, peaceful (no hitting or screaming), supportive parenting. The trouble is, a lot of stuff lives under that umbrella, and not all of it is really evidence based. (I'm talking about stuff like this, *cough* Janet Lansbury.) It is just sort of conjecture. And I mean, think out loud. By all means. But qualify it as such. Don't preach it as fact. You know?

Sometimes it is straight up the OPPOSITE of evidenced based. Like I quit reading Laura Markham's blog and decided not to buy her book (Peaceful Parenting) because she supports anti-vaccine crap ideas and links to anti-vaccine websites from her blog. That is pretty much how you lose ALL credibility with me. That is a straight up deal breaker.

Other times it is just, well, this: Don't Ignore Your Children. I know that positive parenting taken to the Alfie Kohn end of the spectrum is very anti-behaviorism, but I think it is foolish and unnecessary and kind of lazy to broadly reject strategies because they are associated with behaviorism even though they can be adapted to a positive parenting repertoire quite easily.

From a behaviorist perspective, sure – ignoring works.  A child who seeks attention through a tantrum who does not find attention at the end of that equation will learn over time to stop tantruming.  But the problem is this: that child still needs attention.


True. And that is why you should give them attention. When they are behaving. No one is suggesting you ignore your kids forever. Like walk away and pretend you never had them. And "from a behaviorists perspective" it works? So from what perspective does it not work? I mean, huh?

Ignoring does not help a child learn to meet her needs.


False. It does. Spanking doesn't help a child learn to meet her needs, it helps a child learn to avoid punishment. But "ignoring" (which, by the way, was never even defined. so it is basically just this loaded term here that seems to mean, "neglecting.") very much does help a child learn to meet their needs. If implemented in a vacuum, (i.e., without any sort of supportive teaching in advance or rewarding of approximations or scaffolding or spiraling or ANYTHING) then it is not the most effective plan. But ignoring as a form of extinction (gradually removing a response) creates a space for a child to learn and grow. If you always respond to every request, without holding back and letting your child try on her own, your kid will lose out on opportunities to grow in competence and autonomy. But it isn't like you are saying, "enjoy your tantrum, kid. I'm gonna go get my nails done."

Ignoring relies on anti-social modeling to teach pro-social skills, which just doesn't work.  Do we really want to raise children who ignore the voices of those they are close to?


This did give me pause. But only because I think the author and I have different idea of "ignoring." To me, ignoring doesn't mean walking away from a child in distress and watching the Daily Show on DVR. To me, ignoring means ignoring the behavior, not the child. When I ignore, I'm saying, I won't give you what you are demanding but I also won't punish you for your misguided attempt to ask. Instead, I will sit here and give you a space to try again (related, "counting to five"). Because my girls are so young, I'll give prompts and do "graduated extinction," meaning, I will wait progressively longer times for them to try to do it right. What that might look like is a child screaming for a sippy cup. I'd wait patiently to see if they could self-correct (calm down and say, "please"). Then I'd say, "when you can ask in a gentle voice like the one I'm using, then I can help you." Then I'd wait a little longer. And repeat as needed, with longer intervals. With a younger child, like Maggie, I might just say, "cup please" in a nice voice for her to repeat back.


I don't think this is antisocial, and I would hope that they would learn to use this same approach with others. In other words, I would want for her to pause instead of jumping to respond to an irate boss or rude friend. I'd want her to then express her desire to be spoken to respectfully. And I'd want her to expect respect and appropriate behavior from those around her. She isn't ignoring the person or the person's needs. She is just putting a priority on respect.


What can we do instead?

2. Use language that respects needs.

Most of these are actually really good suggestions (details are provided in the post). However, teaching new skills is best done in advance, in a calm setting. This is a time for reminding, not teaching. For sure keep cool. And number four is great and something I always struggle with (I get the urge to yank a toy away from toddlers who are fighting over it, even though I'm modeling grabbing, which is exactly what started the fight; I get the urge to yell, "STOP YELLING!" stuff like that. All. The. Time. When you can master this one, you've reached jedi-level parenting. Congrats!).


The last one, however, is followed by examples that can be summarized as the parents asking the kid why they are doing something. I totally disagree with this.  The problem with "why" questions are:

In conclusion, I probably should, ironically, just ignore stuff like this and not let it bother me. But it does bother me. Because I think it dismisses and maligns effective parenting strategies based on semantics rather than evidence or thoughtful consideration. So I'm just going to take the time to actively teach, just like I'd do to my kiddos who were doing something misguided and ineffective. So there.