Thanksgiving is over and that means, I'm officially allowed to do Christmas stuff. YAHOO!

Right away, we picked out a tree. We brought the kids, which was not an excellent idea (I think it might have indirectly caused my husband to break his toe). It was sort of cute though. Every time we showed a tree to Hannah she'd say, it's not big enough! that's not big enough either! And then she'd wander off and find a five foot tree and say: this! this is big! 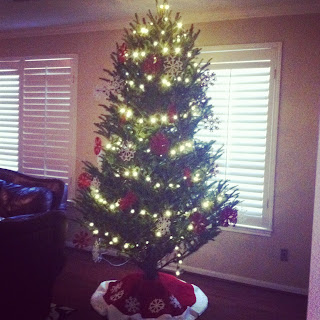 I went with a "snow flakes" and "childproof" theme this year. We thought shatterproof balls were adequately child proof last year, but we underestimated the toddler fascination will all things shiny and round. Generally, the tree only stayed decorated from about three feet high and up.

That little Charlie Brown tree also plays music. The girls like to press it and play "freeze-dance" where you dance until the music stops. Hilarious stuff, I promise. I also like the irony of the "peace" stocking holders in the least-peaceful house on the blocks. I like to apologize to the neighbors every time we see them for all the screaming (mostly Maggie's. maybe also some of mine). They insist they don't hear anything (while Maggie inexplicably shreaks at a twig in her hands), but I'm a little bit suspecting they are just being nice because they don't want to get yelled at. 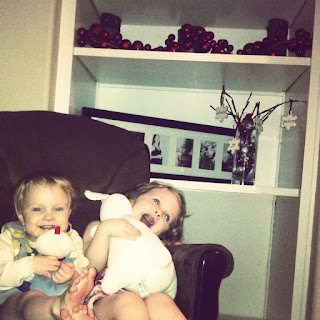