How to {and not to} praise a child 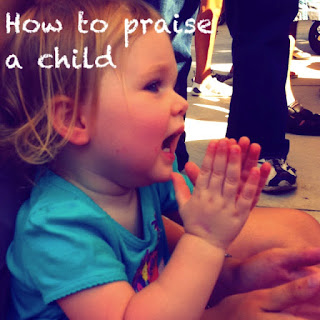 While finishing my review of How to Talk So Kids Will Listen & Listen So Kids Will Talk, I started reading Bringing Up Bebe. Both books talk about praise, a topic I was interested in researching before I even knew it was addressed in these books. So today I'll be talking about the overlap between How to Talk, Bring up Bebe and Nuture Shock's chapter on praise.

How to Talk gives some great guidance on praise. The authors make an excellent point: "most of us are quick to criticize and slow to praise. We have a responsibility as parents to reverse this order...You may have noticed yourself that the outside world doesn't rush in to offer praise. When is the last time another driver said to you, "thank you for taking up one parking spot...?" {This quote conveys, not only, that kids will very much look to us for this sort of recognition, but also that they can't become reliant on it, because they're not going to find it much outside of the home.}

Do How to Talk makes very simple recommendations:
1. Describe what you see: "you cleaned up all the blocks!" or "you climbed all the way to the top without my help!" or "you studied and prepared so well!"
2. Describe what you feel and/or sum up the act in a word: "I really like how organized it is in here!" "What perseverance!" and "You must be so proud of yourself."

Don't They do give the following warnings:
1. Don't be general ("good job! that's fantastic! you're amazing!")
2. Avoid back-handed compliments ("I never thought you'd pass that test, but you did!")
3. Excessive compliments can feel like pressure and can backfire. Especially if you praise them for "being" instead of "doing." E.g., "you're an amazing pianist!" instead of, "I love listening to you practice that song!"
4. By saying, "I'm so proud of you" you are shifting the emphasis from the child's accomplishment (where it should be) to your pride (not everything is about you, OK?! j/k). Honestly, I'm having trouble reconciling how this is any different from describing how you feel. Although I do agree, it is better to say, "you must be so proud of yourself!" to encourage them to internalize the process, for all those times no one is there to pat them on the back.
5. Avoid the, "I knew you could do it!" or "I"m not surprised..." statements. That gives credit to the parent's omniscience instead of the child's achievement.
6. Be sincere and appropriate. Don't praise a high school kid for brushing her teeth (she'll feel patronized), and don't tell a struggling writer he is the next Hemingway (he won't believe you this time or in future times you praise him).
7. The book does caution against operating on a reward system (if you are good, I'll do x), but doesn't go in to much details on this approach or the drawbacks. Instead, it just recommends you focus on clearly stating your expectations and recognizing/describing the effort to meet them when you see it. I imagine Alfie Kohn does go into detail on this though, if you are interested in an interesting but probably-not-super-useful book that I haven't read yet (just read some of his education stuff).

Fear of failure. The authors also discuss children who are fearful of failure. Po Bronson and Ashley Merryman talk a lot about this in his chapter in Nurture Shock (and how it is not from a lack of praise, but instead from the wrong type of praise). How to Talk recommends you don't minimize the child's distress ("there's nothing to be afraid of!"). And also, model an appropriate response to your own mistakes. So don't beat yourself up in front of them! {I'm such an idiot, I forgot the keys! What is wrong with me? That was so stupid.} Instead, model gentle, problem-solving-focused responses {what can I do to avoid this in the future? Next time, I'll put my keys by the door.}

Bringing Up Bebe (A preview, more review to come). In short, this is all about how the French are totally different from Americans in terms of how they view and treat kids. One of the ways they are different: French aren't big into praise. They don't think it is necessary or all that good. Teachers grade harder and don't feel compelled to mention a kid's strengths, just their weaknesses (if they have any). {interestingly, the French emphasize reasoning, not creativity.} Students are told their questions are dumb and are criticized for being wrong {instead of our country's, "close," "almost," and "nice try, but..." statements}. The French are concerned about what kids will do when no one is there to praise them. It sounds sort of harsh, but the author tried to support their approach thinking by citing Nurture Shock. This is sort of an issue I have with this book, it takes a sentence or two from the chapter about excessive praise being bad and sort of makes a straw man fallacy saying that the French, by doing the total opposite, are therefore scientific and right. {In fact, Nurture Shock never says to be a stoic, jerk face. Or that all praise is terrible or ineffective.} Bringing Up Bebe is an interesting book, but it sort of oversimplifies the research it discusses. As in most things, I think the answer lies somewhere in between our two approaches. And I think a more thorough reading of Nuture Shock supports this.

Nuture Shock This is a fascinating chapter. I'd highly recommend the whole book. But you can get this chapter online, too. It begins by explaining how telling a kid they are smart, instead of praising their effort or perseverance, makes them think "smart" is something they either are or aren't {"I am smart, the kids’ reasoning goes; I don’t need to put out effort. Expending effort becomes stigmatized—it’s public proof that you can’t cut it on your natural gifts."} So if these kids whose intelligence is praised aren't immediately good at something, they quit or worse, they just cheat. Instead of this approach, the authors recommend:
1. Praise efforts not intelligence/talent/etc. (like the practice or studying that led to the good grade, great recital, or winning shot)
2. Praise should be specific (describe the behavior/action/etc. Sound familiar?)
3. Praise should be sincere. Otherwise, all your compliments will be suspect. {low performing kids totally pick up on this tendency of adults to think praise=>self esteem=>increased effort and achievement (hint: that isn't how it works) and those kids start to find this behavior suspect. They will ignore the praise completely, relying only on criticism to get accurate information about their ability. yikes}
4. Praise should be intermittent (not excessive, constant, etc.) to teach perseverance. The kid/student learns that frustration can be overcome. (this sort of confirms the "in between" approach.)

Email ThisBlogThis!Share to TwitterShare to FacebookShare to Pinterest
Labels: Bringing up Bebe, Discipline, How to Talk so Kids Will Listen, Nurture Shock, Stuff I Read