The way I see parenting, your first couple years are dedicated to managing the basics: eating, sleeping, and cuddling. It sounds easy enough. Except that somehow, sometimes it totally is not. And then around the first year, your job responsibilities expand and you need to start fostering more complex skills like appropriate toddler communication (which means between year one and two, you are attempting to handle both areas. Which sort of explains all the tears from both parent and child). I’m trying to be really thoughtful about how I discipline the girls. It is really hard sometimes to determine what is and is not age-appropriate behavior and how best to modify the inappropriate behavior. Right now I’m trying to read up on the issue (any recommendations are appreciated!) and until then, I’m relying on some of my teacher training. 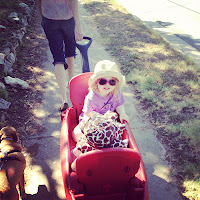 First, discipline means, "to train or educate." Not to punish. Which is important to remember, because punishment is actually (according to research, not just my personal opinion) pretty ineffective in changing long-term behavior.
Ideally, I’d like to avoid as many meltdowns as possible (my first line of defense being to remember the eating, sleeping, and cuddling stuff). Then, starting with the obvious, I’m trying to give choices instead of commands: “Would you like to read a book and then brush your teeth, or would you like brush your teeth first?” “Do you want to start by picking up the blocks, or the crayons?” 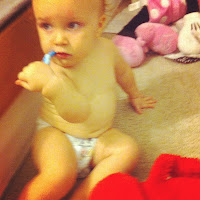 When meltdowns or problems do come up, I am trying really hard to use positive statements like, “we use gentle touches” and “when you can ask for that in a voice like the one Mommy is using, I can understand and help you” instead of saying, things like: “no hitting!” and “stop that!” or “quit whining.” If you give instructions to stop doing something, without giving an alternative (e.g., just yelling, “no!”), you aren’t teaching them anything, you’re just making them feel inadequate and probably even more frustrated. But it is such a reflexive response that it can be a hard habit to break. Even with high school kids, it was easy to forget how explicit you need to be. E.g., show them how to study, explain to them how to check their work, etc. It is the same (just way, way more basic) with toddlers.
Next, I’m trying to help them “use their words” and make sense of what is making them so mad (and for this, I'm going to read How to Talk So Kids Will Listen & Listen So Kids Will Talk) When someone is freaking out, I’ll say something like, “you seem pretty upset/angry/frustrated/sad. Is that right? Is it because {whatever just happened}?” Sometimes just doing this goes a long way to diffuse a meltdown (For Hannah anyway. For Maggie it probably sounds like jibberish. I try to keep my sentences shorter and words smaller. But even still, I think she can recognize the empathy in my response, and prefers that to elevating frustration or demands.) 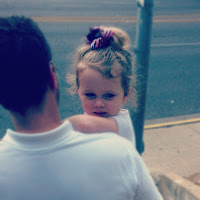 Most of all, I’m trying to positively reinforce their good behavior. I’m going to re-read the chapter in Nurture Shock on praise and read Alfie Kohn’s parenting book (which will probably tell me I’m totally wrong because rewards undermine motivation) to get some perspective. I read the teacher version of Kohn's parenting book in grad school and found it interesting but useless. Basically, he just presents an educational utopia (where all kids are intrinsically motivated, ie, no grades or rewards, to learn), and admonishes everyone for not living in it (good luck getting your grade-less students into college, or helping them succeed when they do get in and then face an academic token economy). I felt like there was zero insight into how to make this magical world of his happen. But still, perspective can’t hurt.
Finally, I’m trying to be more logical in my consequence instead of just assigning time-outs. For this, I’m putting Positive Discipline A-Z and Parenting with Love and Logic on my Kindle this week. {update: holy cow! I just read a chilling review of Parenting with L&L on Amazon. It is free on Kindle, so I'll still read it and review it, but it sounds like I will likely HATE it. So I just wanted to clarify that I'm not advocating any of these books. Just saying I'm interested in reading them.} Again, like the teacher version of the book. Which I remember being part awesome and part stupid.
In other words, I’m going to be using the blog as a sort of brain dump for my learning process. Expect some book reviews and mind changing. And feel free to chime in with any words of wisdom.

Email ThisBlogThis!Share to TwitterShare to FacebookShare to Pinterest
Labels: Discipline, Stuff I Read