For anybody who has been on the edge of their seat since this post, I thought I'd go ahead and let you all know that everything turned out awesome. The hospital sent out a strongly worded email to employees about not giving babies cancer smoking by the playground. Daycare drop offs and pick ups got a lot less carcinogenic and confrontrational. And recently the hospital administrators put up more signs (which everyone agreed is not a magic cure-all, but after all the work Seton did to emphasize the policy, we didn't need any magic). But every little bit helps. Like this adorable sign! 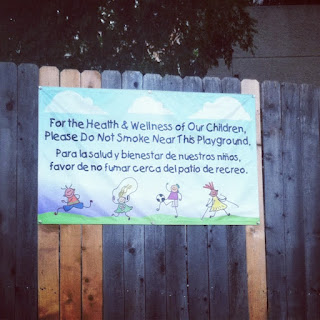 For anybody keeping track at home, this is actually my second no-smoking victory. This fall I convinced a building to not put a smoking section right outside of the oncology clinic. I mean, REALLY. A cancer clinic? You're going to smoke in front of a cancer clinic? I mean, REALLY?? The waiting room smelled like cigarettes. These are people who are going through chemo and radiation and you are blowing cancer-causing smoke at them? In defense of the smokers, there was a freaking ash tray, bench, and possibly engraved invitations to sicken people right outside the door. But once I brought it to the right person's attention (um, not the receptionist for Texas Oncology Midtown. Super not helpful and a little rude. But the building manger for Midtown Medical that I hunted down without that receptionsist's help was AWESOME.), the bench and ash tray were separated by about 100 yards, and this sign was put up in no time. 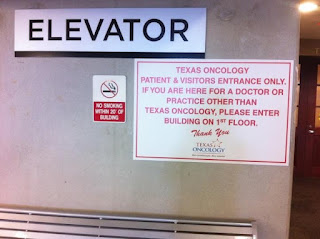 I feel like I should emphasize the fact that I don't hate smokers. Except the hospital employees/smokers who were super rude when I told them that they were actually smoking in front of a playground full of kids. I maybe sort of hate them. Also, I hate cigarettes. And tobacco companies. And their lobbysts. And stupidly placed smoking sections.