The Many Faces of Maggie 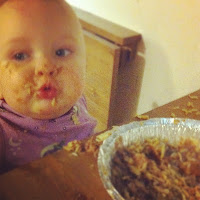 When Maggie was about eleven months old she was forever making this "ooooooh" face. Like she was in a constant state of amazement and awe. She even began to add an eyebrow furrow to the expression as if to say, "ooooh, I don't know how I feel about this just yet." So what I'm saying is, it was a versatile look for her. I immediately began to wonder where she came up with this? Do I make that face? A lot? And then one day the face was gone. 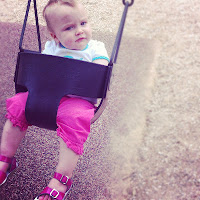 And then a little bit after her first birthday, she introduced us to the, "seriously?" face. It was more like a glare. With her eyebrows furrowed and her head slightly cocked to the side. She would always save this face for meeting new friends. I'd ask her to say hello to so-and-so and instead she'd just give them this, "who are you?" stare. It's not her friendliest look, but I found it difficult to explain that concept to a one-year old. 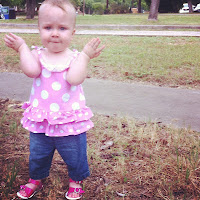 Most recently, Maggie replaced the seriously face with my absolute favorite, her "I don't know" shrug. It's a little too cute, I almost can't take it. She uses it to ask and answer questions. For example, she'll hold her arms up in the air with her palms facing the sky and say, "where dada?" (or bottle, or mama, or rarah, aka Sarah). Or if you ask her a questions she doesn't know the answer to, like "what did you do with your shoes?" she'll use the same look but only offer a little "eh?" It cracks me up. Except when she is asking where Sarah is, and Sarah is gone. But seriously, mom, where is she? and OMG she is gone. All. Night. Long. And the only thing that can make the incessant, frustrating question repetition bearable is the way Hannah responded to her. She gave me an exasperated look and asked, "Why is Maggie acting all crazy?" To which I just shook my head and then probably made the "I don't know" look followed immediately by the "seriously" face. 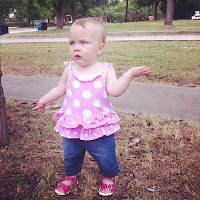