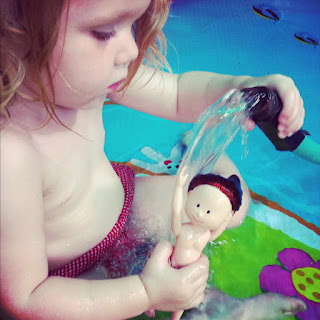 Last night Maggie was about half way through her bath before I realized she was still wearing her diaper. That is pretty much all I have to say about how the last couple weeks have been.

First, I got sick. And I actually stayed home part of a day. Which felt like an extravagant and almost wasteful use of a sick day. You know, for me to actually be sick (as opposed to one or both of my children). Then the girls got sick. It was just a sore throat/cold/cough sort of bug. Nothing huge. Just bad enough to make it hard to sleep. And then to be awake. But when Maggie got it, she started having trouble breathing and we had to take her to the ER. For some reason I thought we had hit some sort of ER trip quota with her. Like I thought we were moving on to some new phase in our life where medical attention would become less frequent. But even worse than the ER bill, is the terrible sleep we have all had. This morning we made it until almost 4:30 AM without anyone crying, or coughing, or gasping, or all of the above. So I feel like we are making some progress towards one day sleeping normally again.

The thing about sick toddlers, their colds can last for weeks. And you can’t stay home from work for weeks because of a cold. But going to work those two weeks means that every single day at drop off you feel like the worst mom in the world. And then every single day at pick up, you feel it again. And then you are usually late to work because of some combination of tears, coughs, ibuprofen, and guilt. And then you just feel like you are failing at everything: parenting, working, being awake.

I’m not even going to say, "at least no one is throwing up," because last time I did that my gratitude backfired. Instead, I will just end with a bit of wisdom: Those neat scented markers that aren't the regular Crayola kind? They don’t come out in the bath (not the first two anyway). Just keep that in mind in case your child starts coloring herself. That is all.