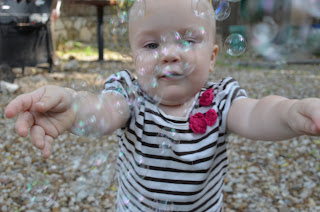 Today was sort of a rough day. Maggie was just inexplicably needy. It was hard to get much done. And before I knew it, I'd let myself slip into a food-deprivation-induced nasty mood. It was sort of stupid, though. I pretty much had two breakfasts, so a late lunch shouldn't have pushed me over the edge. But it did. Just ask Cork. (Sorry again, babe.) 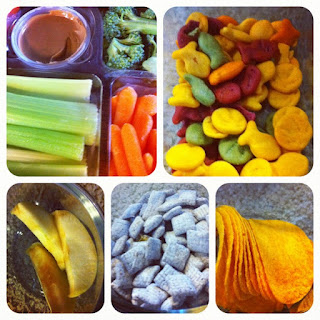 So I responded like any crazy hungry girl would. I took Hannah to the quickest convenience store and we grabbed the most ridiculous snacks (Pringles and chocolate and powdered sugar covered Chex. So by ridiculous, I mean awesome. But it's OK because I served it with fruit and veggies.) and the old standby, Goldfish. It was amazing. I immediately felt like a whole new person. Also, we might have ruined our appetite for Easter dinner (Salt Lick BBQ, complete with cobbler. My favorite.) But it was still kind of worth it. 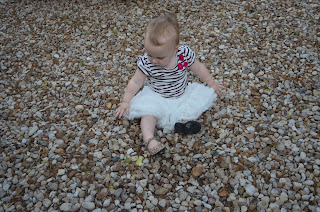 Then it was time for the Easter egg hunt. 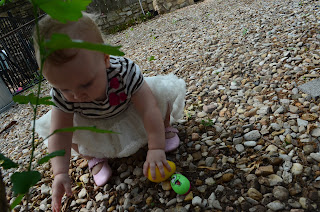 Maggie pretty much found two eggs and was like, "Two hands, two eggs, done and done." Watching her try to figure the whole thing out sort of felt like the exact opposite of Hannah's first egg hunt last year. Towards the end of the hunt, every time Hannah leaned over to pick up an egg, another one would fall out of her basket. And then she'd find the fallen egg and exclaim, "More eggs! More eggs!" It was like the most adorable, magical, never-ending egg hunt. 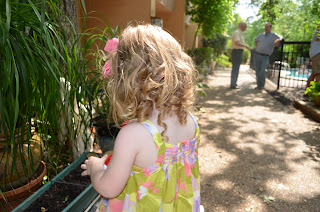 This year, Hannah was a bit more savvy.  And while both kids "got" the Easter egg hunt to varying degrees, neither of them seemed to really understand the point of the eggs, once they had them in the basket. Sometimes an egg would open up on its own, and they'd enjoy some stickers or candy. But they pretty much lost interest in the eggs by the time we got home. 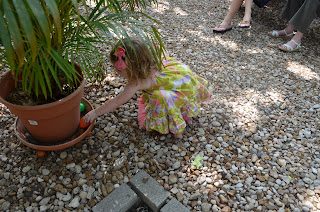 Which is good news for me.{That's right, kids. Mommy is gonna eat most of your Easter candy. Again.} 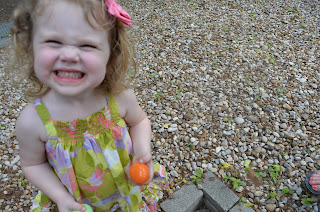