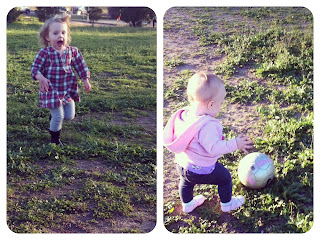 At the park, I always try to convince Hannah to get off the play ground and go play in the green grass. For one, it has a better kid to square foot ratio (not that our parks are very crowded, but still). Also, it is better for imaginative play and exercise. The best parts of being outside.

As for the kid to square foot ratio thing: once, this older boy (I'm guessing seven), was running around pretending to be a dragon. And Hannah didn't know what to make of him, although he was dead set on engaging her in some sort of pretend-dragon action. He was sort of freaking her out. And at one point, he spit on the slide (breathing fire? I don't know. I am not familiar with boys and am scared to death this sort of stuff is normal and I might have one of my own of these one day, spit and all). So I was sort of freaked out too. I didn't want her to go down the spit slides, because I could see the pools of grossness from the top of the play scape. After some poor unsuspecting kids slid down it, I went back to make sure the spit was gone. She asked what I was looking at, and I said "germs." After that she kept saying, "where are the germs? There are germs on that slide!" I didn't want to be "that parent," who was paranoid and/or grossed out by other people's kids. But maybe that is exactly what I was right then? Oh well.

But back to the non-antisocial/hygienic benefits of the green grass. Once we get out there, Hannah likes to play pretend games. Often times, they involve doing things like going to the store, checking the mail, and making dinner. And there is a lot of running around. (I was once told a tired dog is a well-behaved dog. I like to think the same is true of children.) The only bad thing about the park is when it is time to go home. Well. That and the spit.