I survived the first six weeks. Barely. Here is a recap. 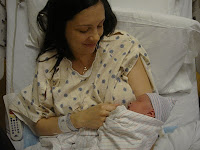 She was born on February 16, 2011 at 11:59am. She weighed 8lb 2oz and was 20.5 inches long. Her labor was amazing. It was three quick hours. One and a half of which were unbelievably painful and the other one and a half were blissfully pain free. She practically delivered herself. My recovery involved waiting for the epidural to wear off. I never even needed a Tylenol. Nothing ever hurt. I nursed her right away, (which I never got to do with Hannah because the STOLE her from me!) and it was a smashing success. It was love at first sight and I thought we were destined for the easy road.

But that was just silly. We left the hospital early, but promised to follow up the next day with her pediatrician because she had a little jaundice. The jaundice was horribly inconvenient (all the heal pricks and the god awful billibed), but thankfully mild. Four days later, we were in the Emergency Room because she threw up massive amounts of blood. It was mine, and I was almost certain of this. But due to the "massive amounts" issue, we had to get her checked out right away. One hour and $300 later (so much for the argument that breastfeeding is free), the friendly doctor and nurse confirmed this for us. She was fine.

Fortunately, after a three day break from breastfeeding, I was totally healed and she latched right back on. Things have been smooth sailing ever since.

Fortunately, I think (fingers crossed) that she survived the colic. And more importantly, so have we. Because, let's be real. She won't remember this. I, however, am scarred for life.